This is a summary of what was said by UNHCR spokesperson Shabia Mantoo – to whom quoted text may be attributed – at today’s press briefing at the Palais des Nations in Geneva.

The relief supplies were delivered from UNHCR’s stockpiles in Kabul and loaded onto nine trucks on Thursday. They will support some 4,200 survivors in Giyan, Bermal, Zerok, and Nika districts in Paktika province and Spera District in Khost province, which have seen hundreds of casualties and thousands of homes destroyed or damaged. Tents and other emergency relief items are sent from a warehouse in Kabul to the earthquake-hit provinces of Paktika and Khost. © UNHCR/Tom Winston Monboe

In the worst earthquake to hit the country in the last twenty years, almost 800 people have been confirmed dead and many more injured. The devastation was compounded by the fact that people were sleeping in their mud houses in one of Afghanistan’s most remote regions.

Paktika Province was worst affected with Afghanistan’s interim authorities so far reporting 500 fatalities in Bermal and 238 in Giyan districts. Some 29 fatalities were reported in Spera district of Khost Province as of Thursday. In addition, at least 1,455 people have been injured across three of the six most affected districts of Barmal, (1,000), Giyan (393), and Spera (62) – many of them seriously.

Afghanistan’s interim authorities report that most search and rescue operations had been completed already by Wednesday evening, but due to the remoteness of the affected areas and with additional assessments taking place on Thursday, the number of casualties and damage estimates could rise. Heavy rains have swept the region in recent days, compounding the misery.

UNHCR deployed staff who will help arrange shelters for people who have been left homeless by the devastation. UNHCR teams are establishing three supply hubs in Giyan, Bermal and Spera districts so that humanitarian support arriving from Kabul can be swiftly shifted to the communities affected by the earthquake. More support is urgently needed to avert a subsequent humanitarian disaster in the affected areas. There is also a serious risk of waterborne diseases.

Four decades of conflict and instability in Afghanistan have left millions of people on the brink of hunger and starvation. Already some 24 million Afghans are in need of humanitarian assistance due to the hunger and economic crisis, lack of development aid, and the impact of the changeover in government authorities ten months ago. Afghanistan currently has some 3.5 million conflict-displaced people plus some 1.57 million climate-displaced people. In recent months there have been repeated bombings and violent attacks in various parts of the country.

UNHCR is supporting millions of Afghans inside the country and in neighbouring Pakistan, Iran and Central Asia. 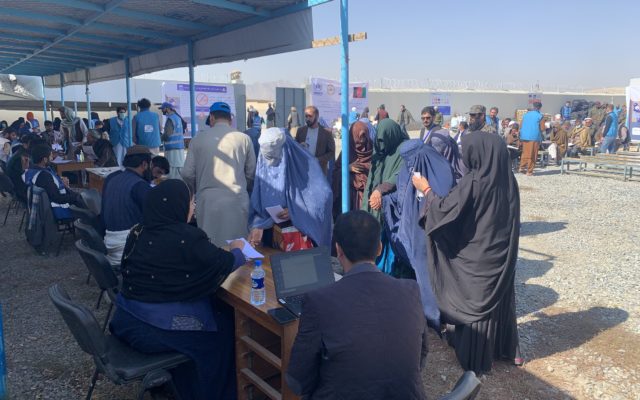